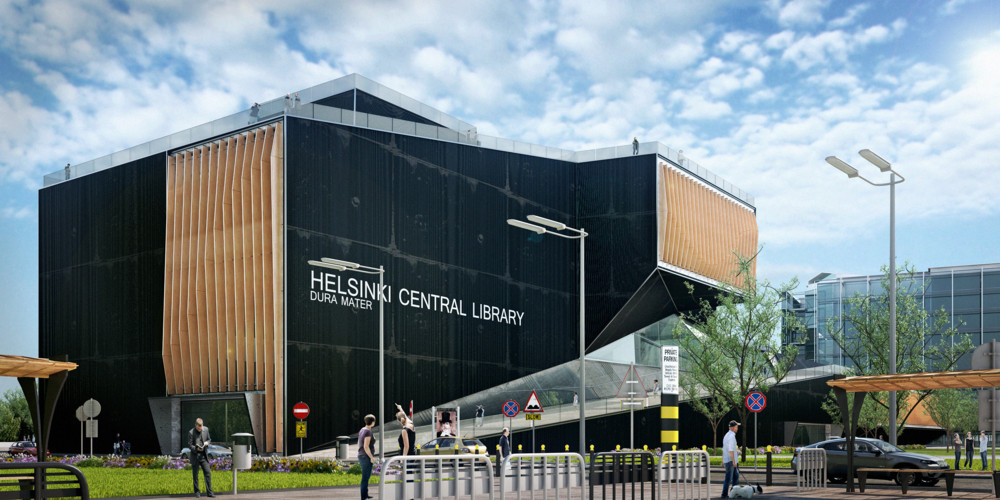 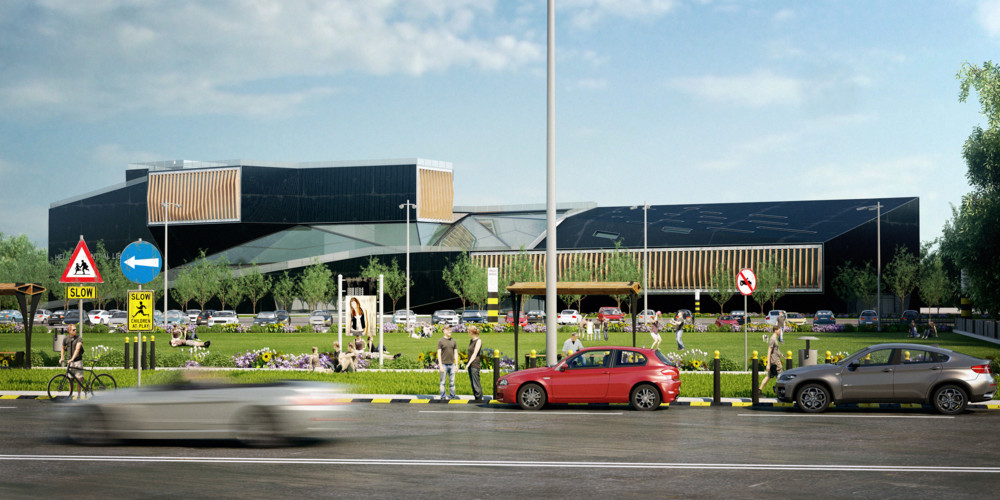 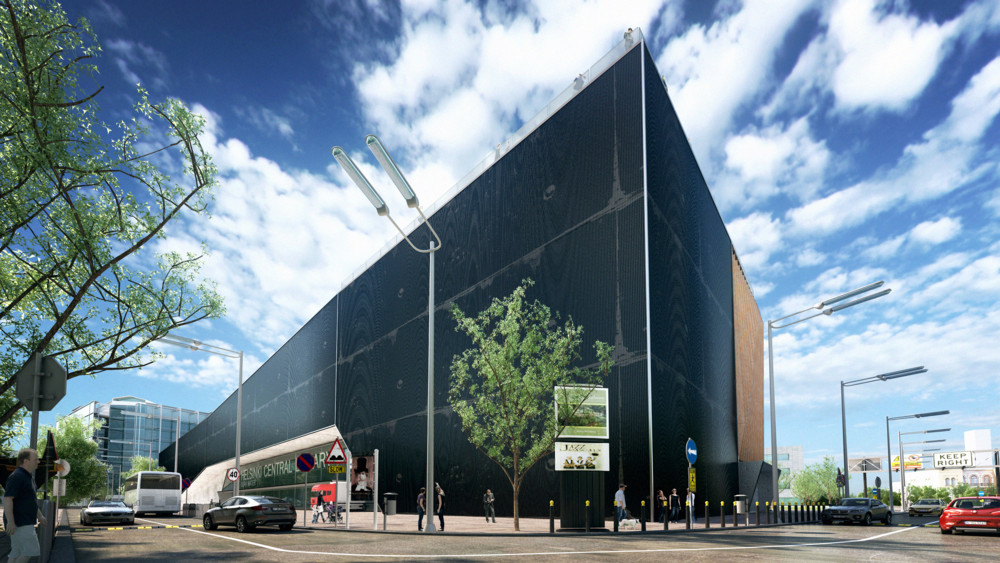 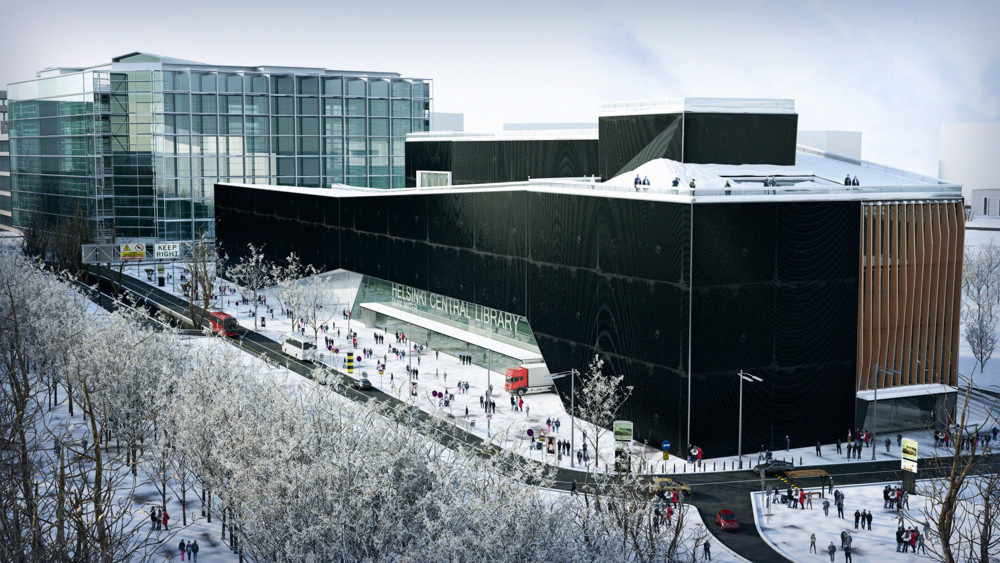 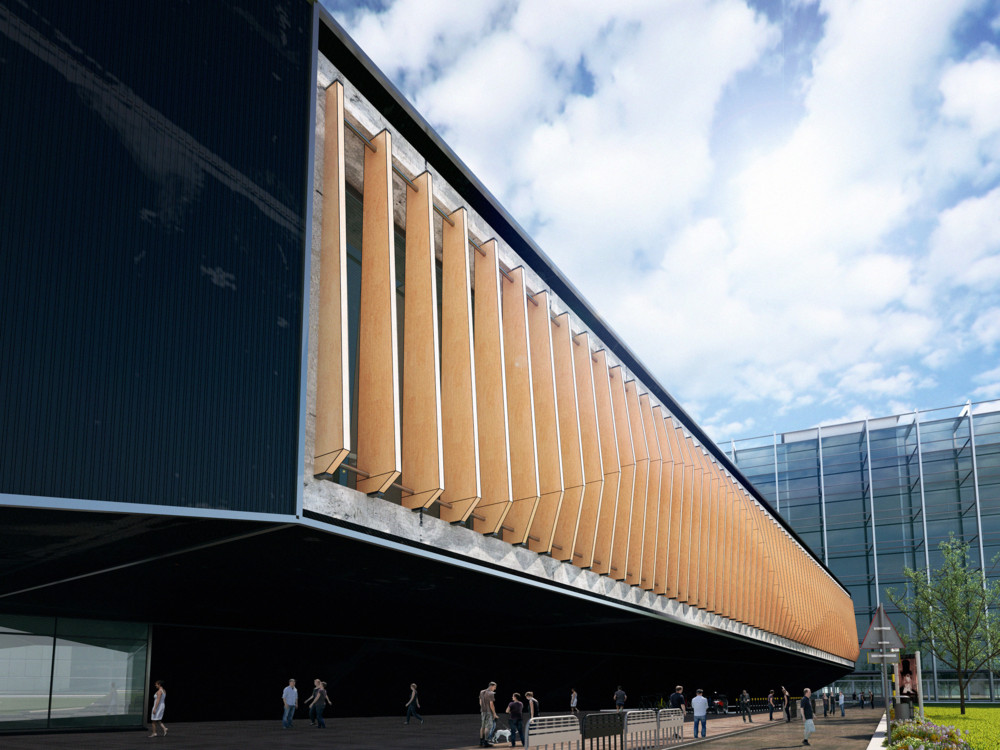 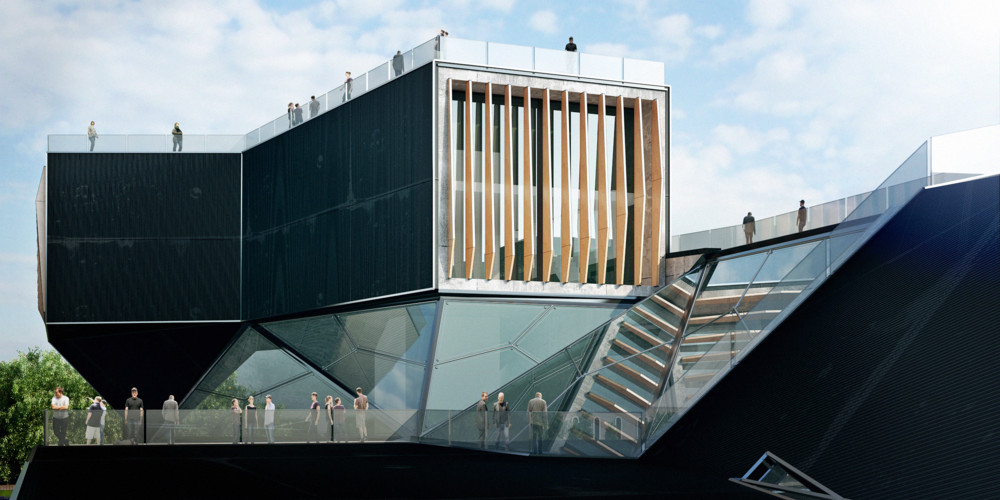 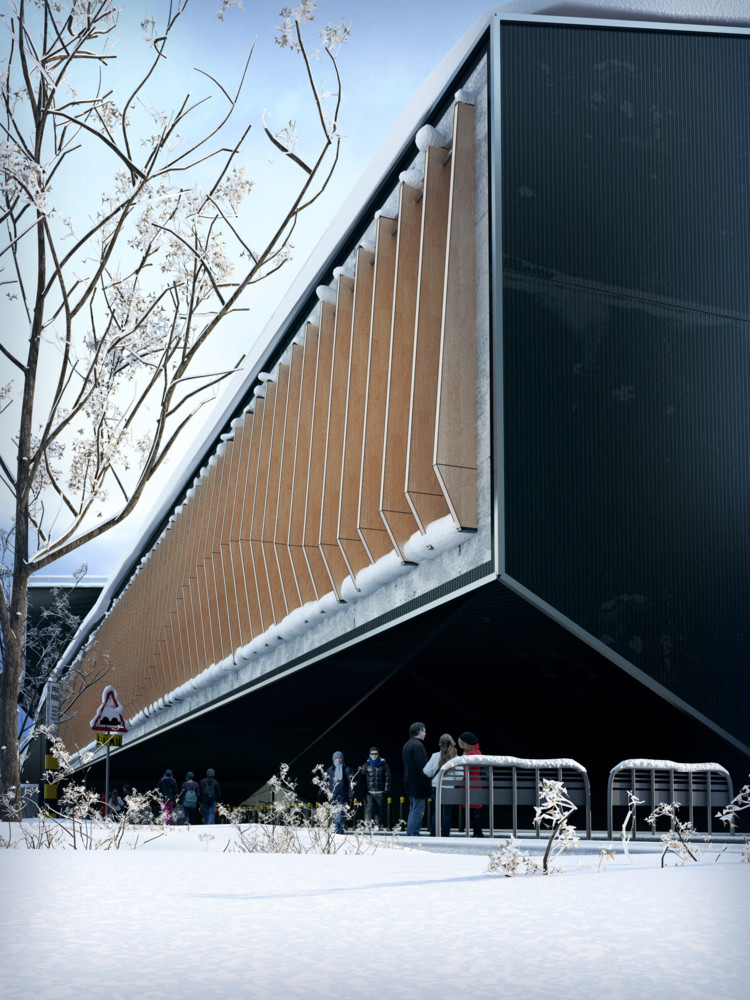 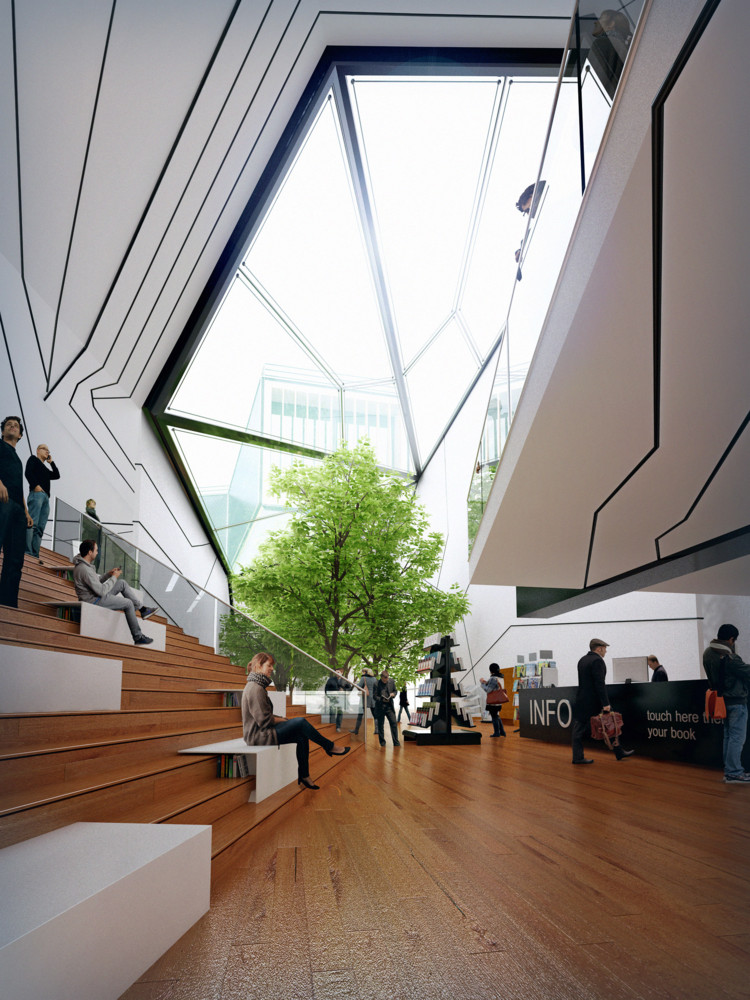 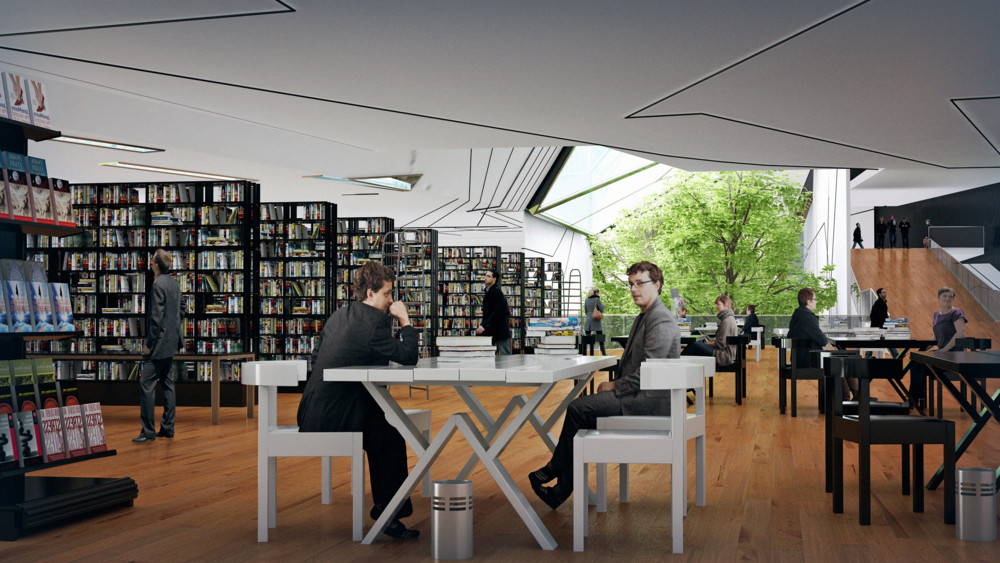 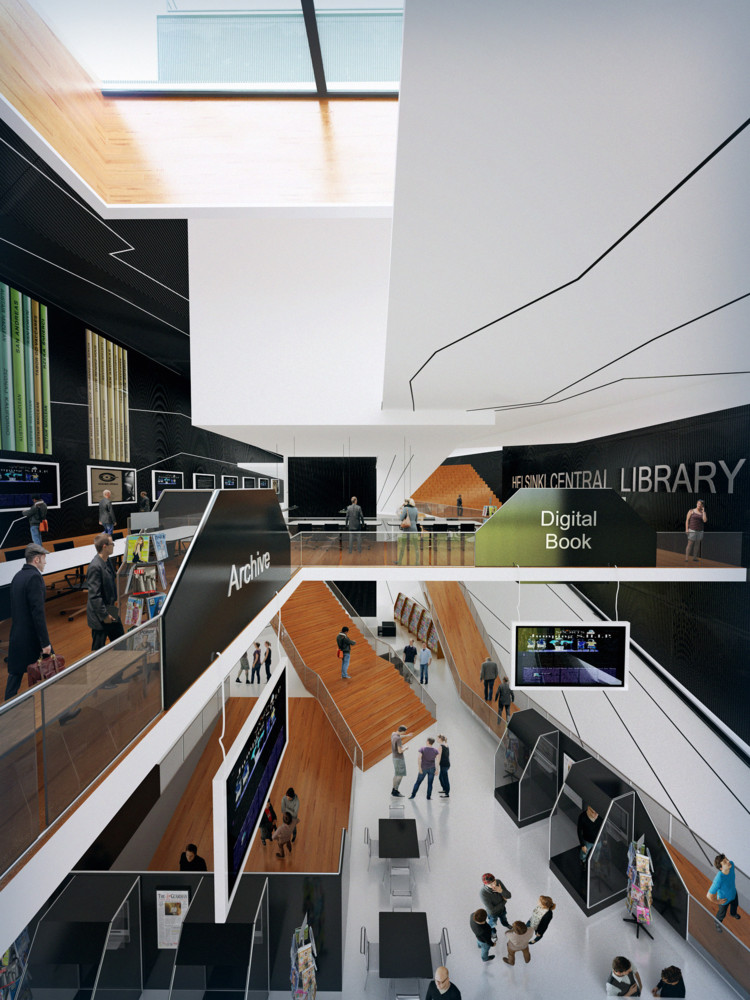 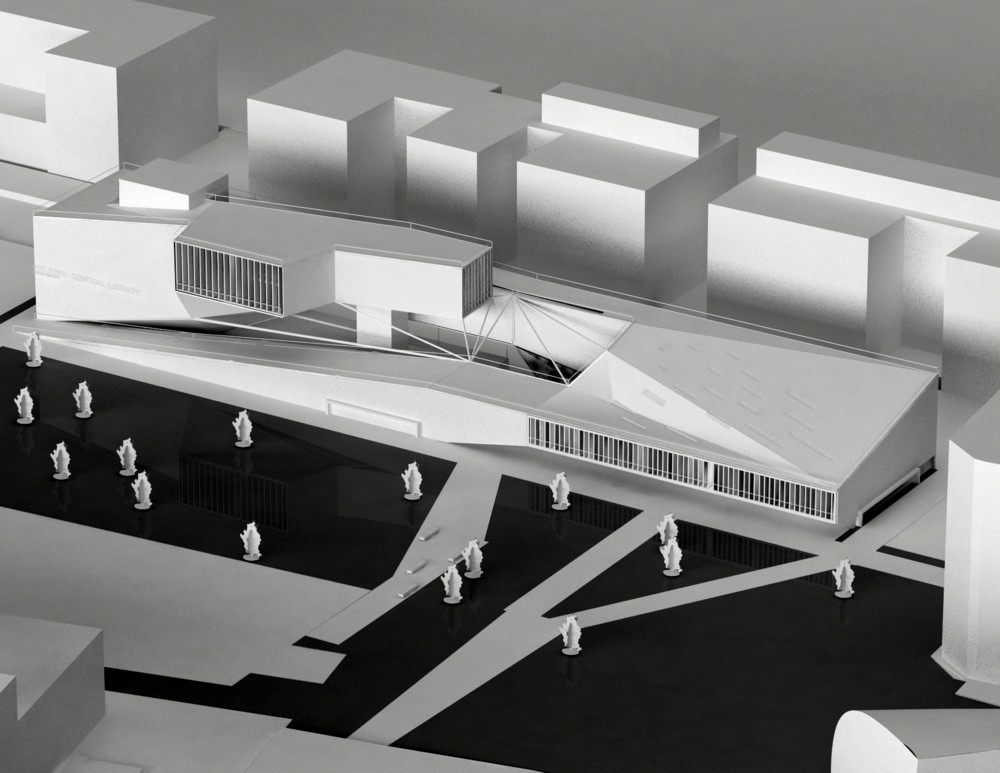 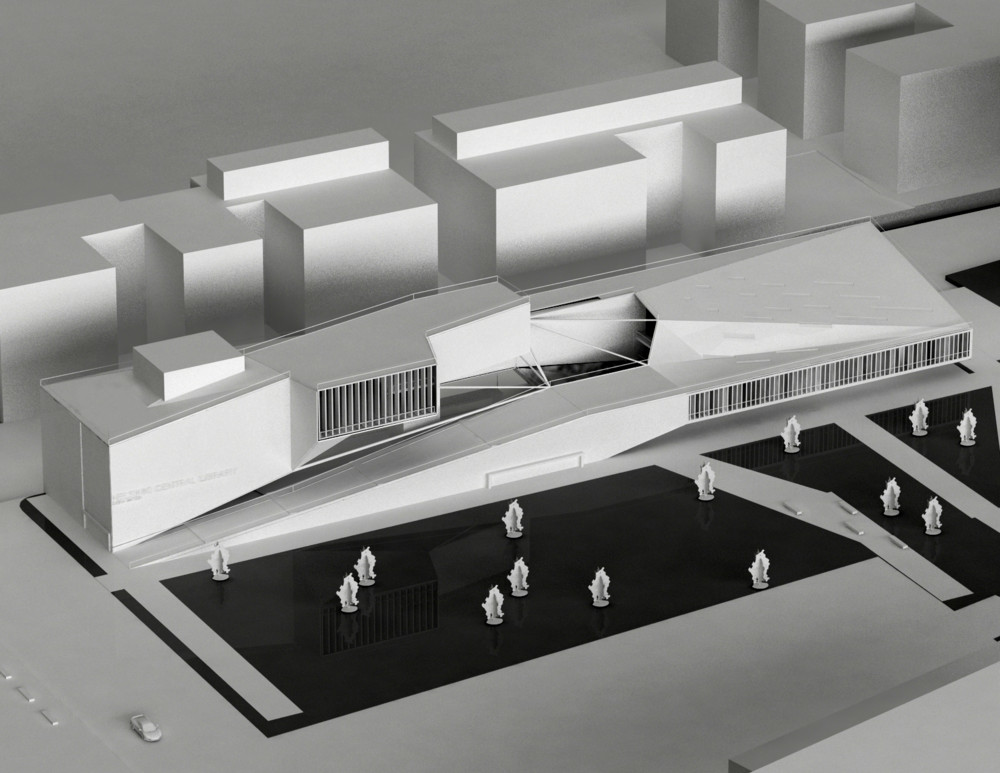 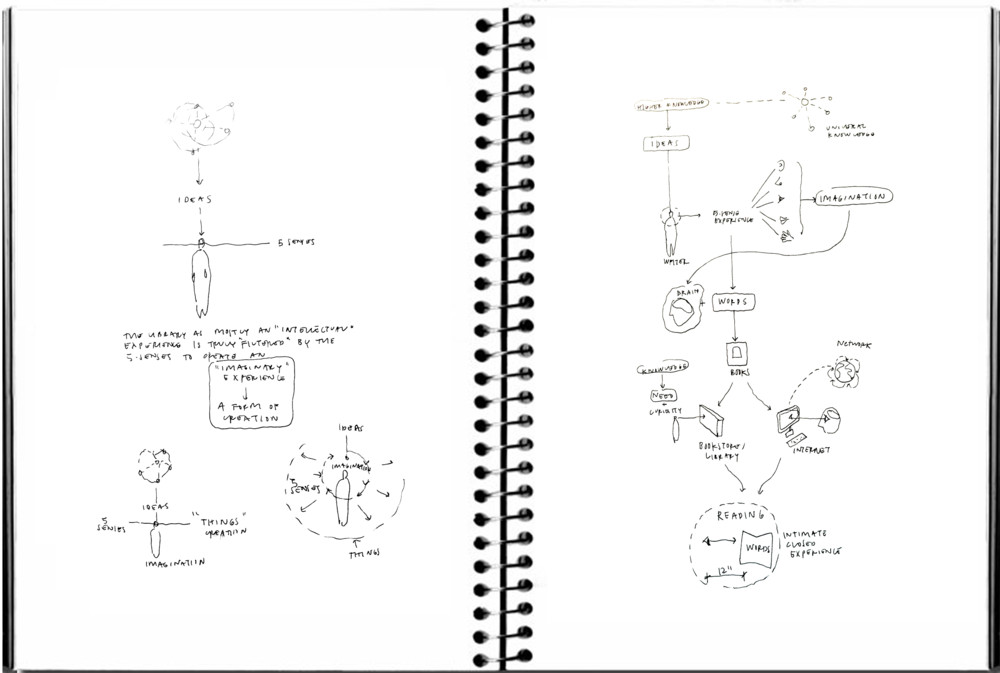 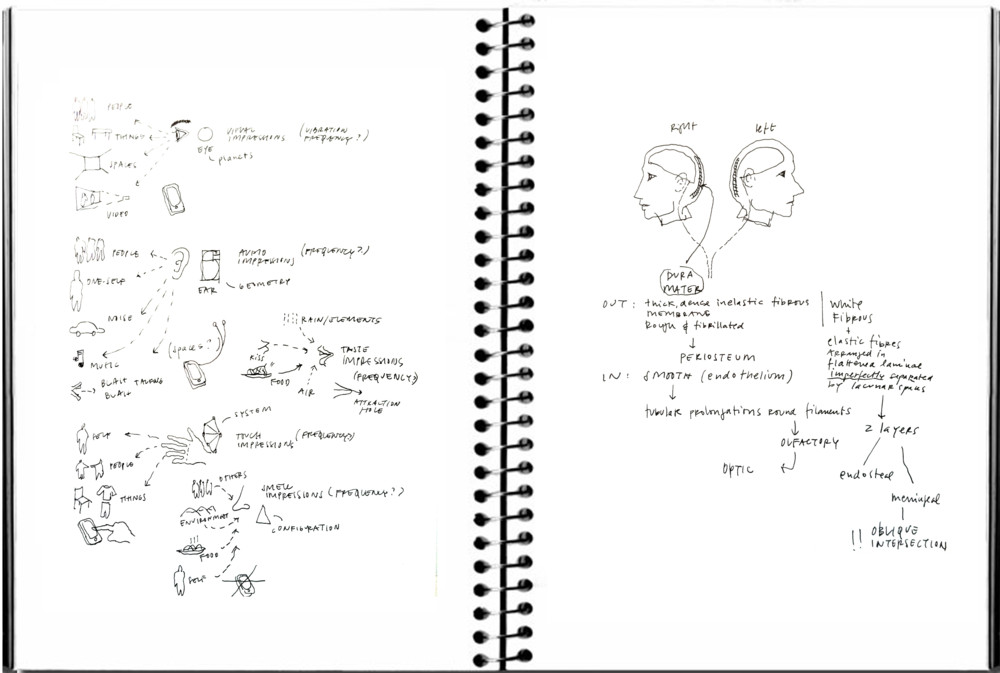 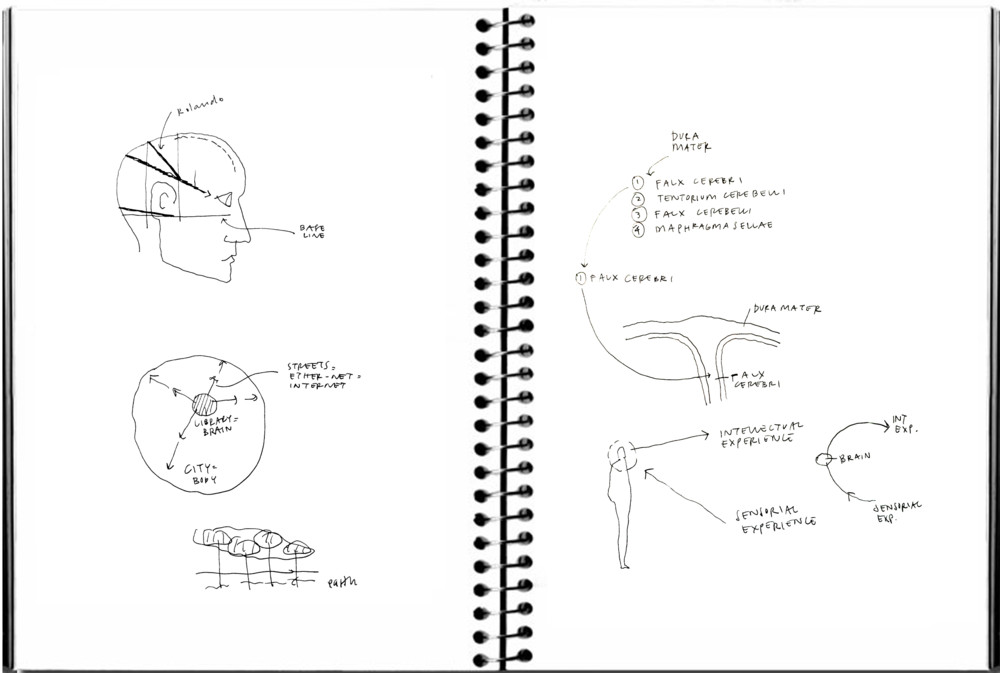 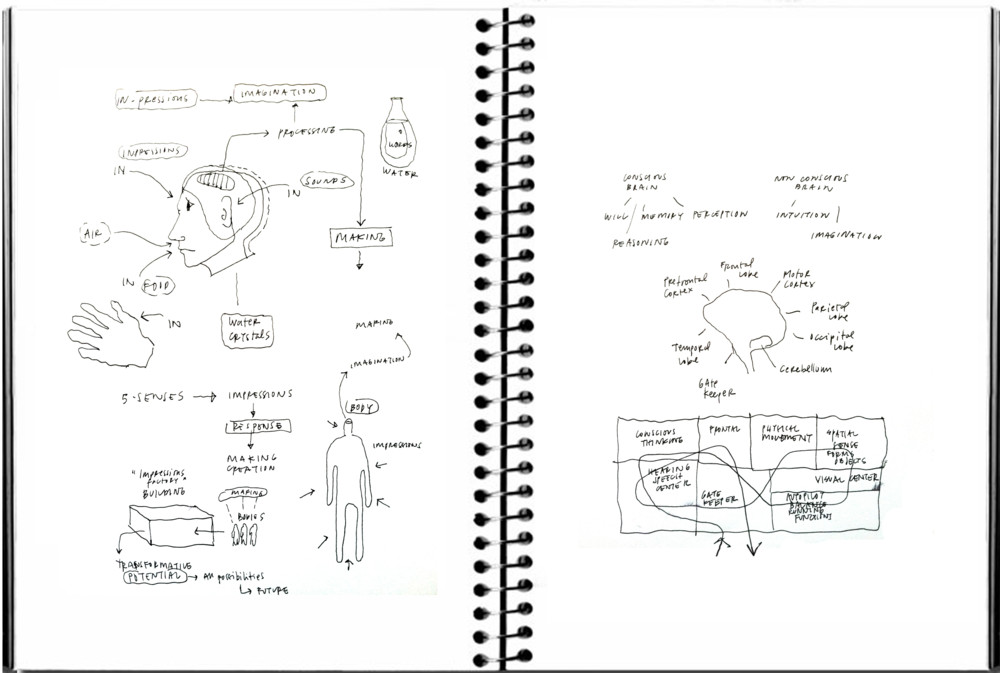 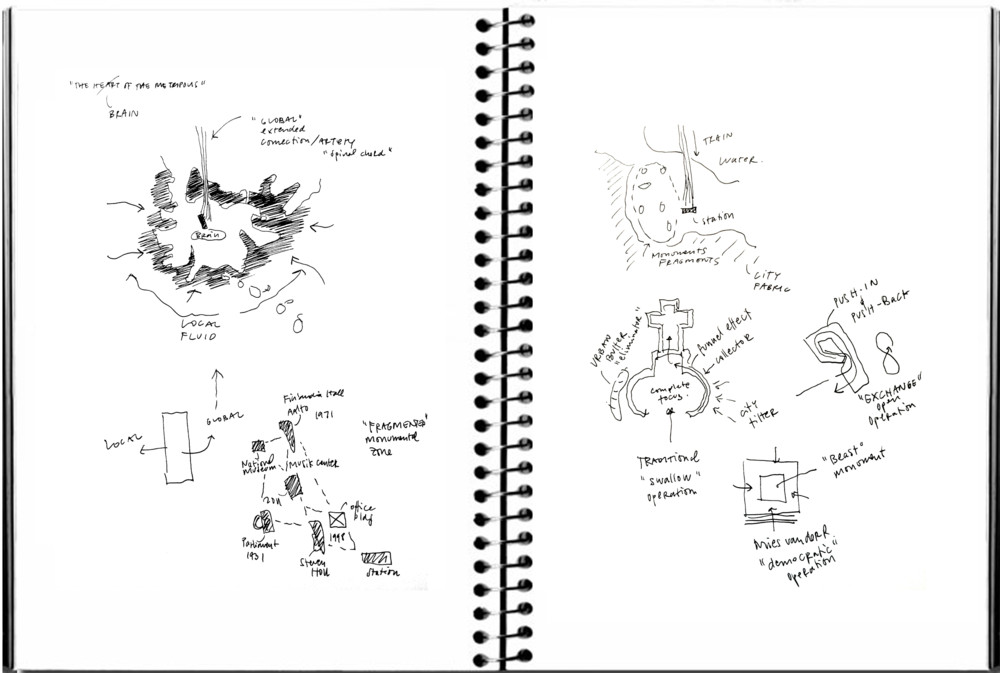 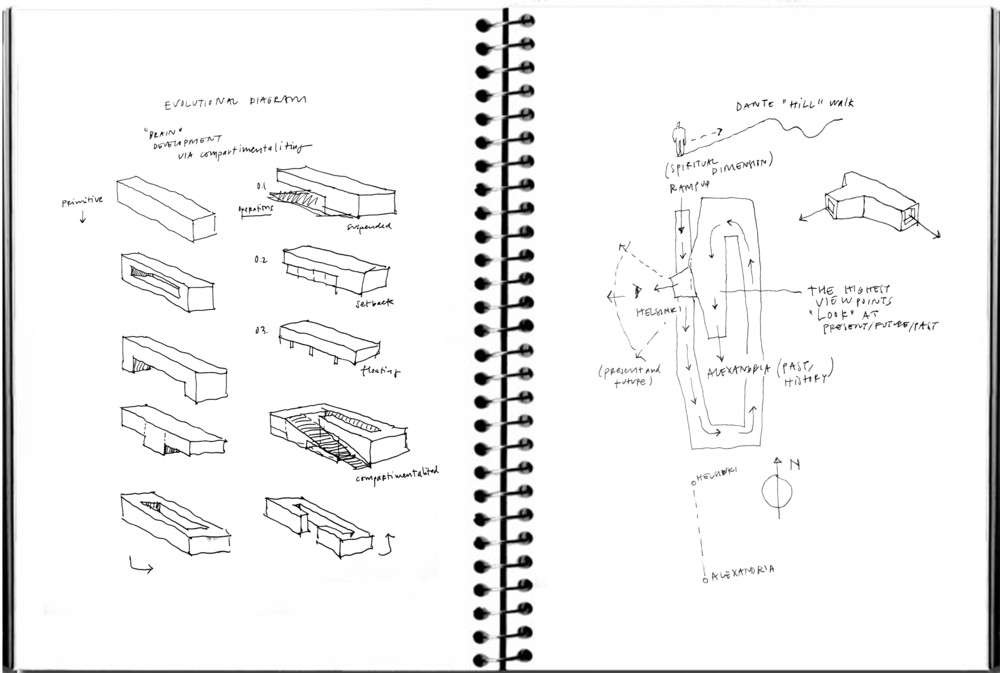 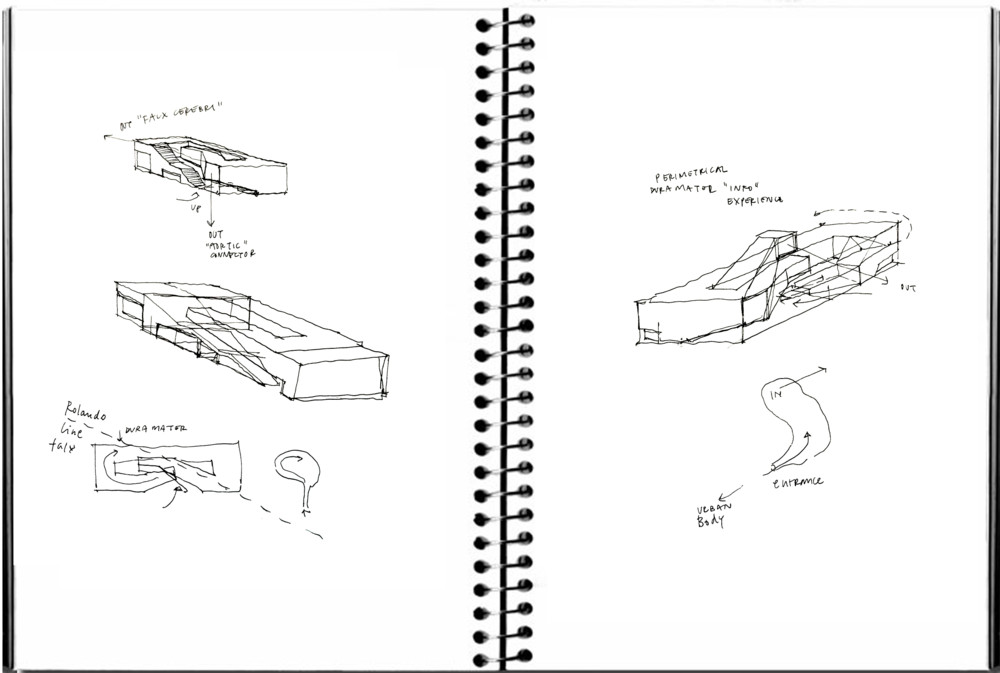 The new Helsinki central library serves as an extension of the natural park surrounding it. The park filters itself into the library traveling from the West to the East of the city block becoming “trapped” into building structure. The park pushes the masses both horizontally, North and East, and vertical, ground to ski. The result is a U shape building elevated thought a ramp traveling from the ground level and culminating in a roof terrace. Furthermore, the horizontal force of the park divides the building into two wings, North and East and transforms itself into an interior reading garden. Horizontally, the building is connected by the café at the ground level and the restaurant and sauna at the top level liked by a direct elevator. The trapped park forms two panoramic windows seeking to scape looking in the direction of the parliament building to the West and Alexandria to the South. All the knowledge brought into the library by the city through the park makes the new Helsinki central library the brain of the metropolis; a direct receiver and transmitter of information and excitement clearly reflected by its constant ever-changing program of events and its permanent collection of knowledge.
DURA MATER The BRAIN of the Metropolis HELSINKI CENTRAL LIBRARY

“Dura Mater is a thick and dense, inelastic, fibrous membrane which lines the interior of the skull. Its outer surface is rough and fibrillated and adheres closely to the inner surface of the bones, forming their internal periosteum, this adhesion being most marked opposite the sutures and at the base of the skull. Its inner surface is smooth and lined by a layer of endothelium. it send four processes inwards, into the cavity of the skull, for the support and protection of the different parts of the brain.” [Gray’s Anatomy, Henry Gray and H.V. Carter]

These funtions are all “kept together” by the exterior building envelope which creates a sort of continuity and consistency throughout the building. Similar to the Dura Mater of the brain, the Library envelope carries information both to its users and as a response to the environment around it.

The Library is accessible on its roof via a ramp that begins at grade on the main piazza. The promenade ascension is both a physical experience of the changing city scape and the spiritual counterpart to the idea of “change” in mind. Similar to Dante’s journey, the sloping uphill can be experienced as a transformative moment, arriving at the top floor room which faces south towards Alexandria and the Finnish Parliament.

IMPACT OUT Alexandria and the Parliament

The Library ultimate view points are the two large window-rooms of the top floor restaurant, Jazz bar and Sauna. These spaces face west and south, aligning respectively with the Parliament and House of Music, and the trajectory of the Alexandria Library in Egypt. These views activate a connection to the past, present and future of the library and welcome visitors to re-experience it in a forward thinking dimension. IMPACT IN Full space and Lobby Garden

Inside the Library spaces are diverse, complex and exciting. Organized around the central garden lobby, which can be designed as an enclosable winter garden, the two main wings of the library and the east and west bridges act as extension branches from the central garden core, similarly to the beautiful and serene areas created around the trees. URBAN LOCI Reciprocal Feeding

The Library acts as a receiver and emitter of information creating a “8” figure loop with the city of Helsinki and the World at large. Different from an enclosed enclave which protects knowledge, the Dura Mater Central Library collects and spreads knowledge at the broadest possible scale. MAIN STRUCTURAL SOLUTIONS AND HVAC TECHNICAL SOLUTIONS (Operational principle and factors affecting the energy performance)

VENTILATION Ventilation air is introduced to the building through the four vertical shafts and gathered into the central mechanical space to be thermally moderated by the exhaust air through heat exchange. The fresh air is distributed via the interior plenum of the building envelope which contains small valves to release the pressurized air to the interior spaces, much like an under floor air plenum that is instead incorporated into the envelope itself. Ventilation will be provided to provide the stated air change rates. This air will be minimally conditioned to be delivered at close to room temperature. Additional heating, cooling and dehumidification will be provided via heat pumps or district heating/cooling systems based on the seasonal carbon/energy profile of these resources. A high-efficiency heat recovery wheel will be provided to capture free heating or cooling from the building relief or exhaust stair stream. Additional free heating will be provided by capturing” greenhouse effect” heat from the double-wall system. Demand controlled ventilation will be provided via CO2 and VOC sensors strategically located within the building envelope. The SFP values include 2.5 for the central mechanical ventilation including heating, cooling, heat recovery, 2.0 for the central mechanical ventilation including heating and cooling, and 0.5 for the envelope-local ventilation within the spaces. COOLING Cooling is a small load for the climate and since the building envelope is designed to be a continuously responsive envelope balancing out heat sinks and heat sources, additional cooling requirements will be much lower than additional heating requirements. Nevertheless, cooling may be needed for occupant comfort. The courtyard places a primary role is providing access to natural ventilation through the courtyard skin, which is operable for air movement, unlike the exterior building skin. Intake through the courtyard skin and exhaust through the vertical stacks of the building allows natural air flow during months when the outside temperatures are comfortable. If the capacity of the thermal mass and natural ventilation to cool the building is exceeded, district cooling and/or the building heat pump will provide cooler fluid to circulate through the envelope interior plenum, providing radiant cooling for comfort. District or heat pump cooling will be provided for network rooms and other spaces with high heat loads and/or controlled 24 hour cooling needs. DOMESTIC HOT WATER The integrated envelope carries fluid that can be exposed to the solar radiation and collected for domestic hot water. This will need to be supplemented during the winter months with heat pump or district hot water that can be utilized for domestic hot water generation via heat exchanger for large restroom fixture groups. Single isolated restrooms will utilize instantaneous electric water heating.